in the upper right of a script.

The full script editor contains all options covered on this page, while the inline editor offers a pared down version for quick editing.

For more information on types of scripts, see Script Types and Creation.

To access the full script editor from within the inline version present within transformations, click the popout icon

in the upper right of the script: 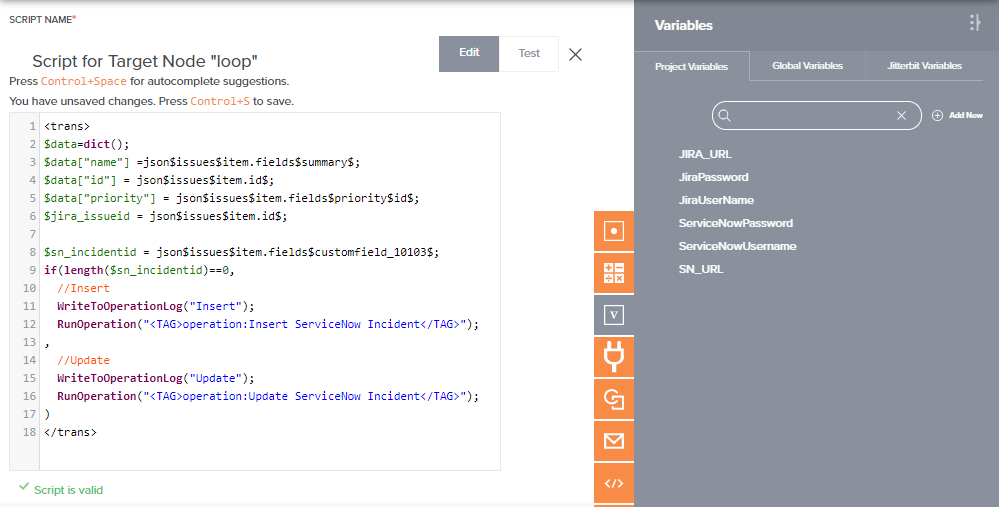 When you create a new script, its default name is New Script. Subsequent new scripts with default names are appended with an incremented number in parentheses. Script names must be unique and must not contain forward slashes (/) or colons (:) to be valid.

To rename a script from within the script editor, edit the Script Name field in the top left:

Scripts can also be renamed from these locations:

You can add custom notes to a script that serve as documentation or reminders for yourself or project collaborators. To add a note, click the note icon next to the script name:

An editable area opens, where you can enter the text of your note. Click Post to add the note on the script: 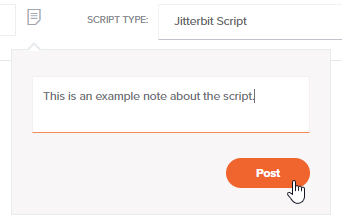 Your posted note is displayed, along with your name and a timestamp. Anyone with edit access to the script can remove notes by clicking the remove icon

. To close the note, simply click another part of the interface. 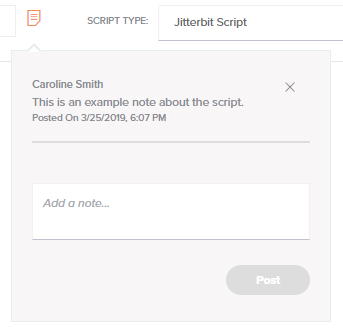 When one or more notes are present, the note icon color is displayed in orange:

Additional notes can be added using the same method described above.

Saving and Viewing the Save Status¶

After making changes to a script, the script configuration saves automatically. To manually save the script, press Control+S (Windows or Linux) or Command+S (macOS).

The save status is displayed along the top of the script below the script name. These statuses are possible:

Scripts created as a project component open in Jitterbit Script language by default. The language can be changed to JavaScript using the dropdown:

Scripts created within a transformation, either on a target field or on a node, are limited to Jitterbit Script language.

Scripts are opened in edit mode by default. To open the script in test mode, use the toggle in the top right to select Test:

To exit the script and return to the previous screen, click the close icon

in the top right.

The script area is the text area where you enter a script using the appropriate language: Jitterbit Script or JavaScript.

In Jitterbit Script, scripts must be enclosed within a <trans> opening tag and </trans> closing tag, unless using functions that specifically call for code to be placed outside of these tags, such as several Database Functions.

In JavaScript, scripts must be enclosed within a <javascript> opening tag and </javascript> closing tag.

These are the main features of the script area:

In addition, standard browser features for undo, controlling font size, and searching within the script may be used.

Adding Components from the Palette¶

The script component palette provides access to various components that can be used within a script. Each tab is summarized below, with additional details provided in Jitterbit Script or JavaScript depending on the language.