Mapping to a Target Field¶

Source fields can be manually mapped by dragging and dropping, double-clicking, or manually inserting the source object's reference path:

A referenced source object is visually displayed within the mapped target field, with a script icon

added in the top right to indicate the field has a mapping:

To view or edit the mapping as a script, double-click the field name or click the script icon

to open the editable script area for the target field in script mode:

Mapping to a Field with an Existing Mapping¶

When dragging and dropping a source object to a target field that already has a mapping, you are presented with the option to copy the source object reference to your clipboard so that you can manually paste that reference into the script logic:

On clicking Continue, the target field becomes expanded with an editable script area for you to paste in the source object reference in script mode. For mappings that contain multiple references, you must then add scripting logic to make the script valid. For example:

For mappings with multiple mapped objects or scripts, hover over the variable within the target field and click the edit icon

, then edit the script to remove the variable mapping:

on the target field.

Within the editable script area, you can also manually clear the contents of the target field script to remove the entire mapping.

For mappings on hierarchal schemas, options for removing multiple target field mappings are available within a node's actions menu.

From either mapping mode or script mode, hover over a node name and click the actions menu icon

to open the actions menu. From the menu, select one of these mapping removal options: 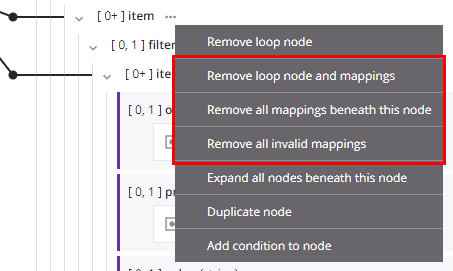